The very first night of our Icelandic adventure we spent in a car park… I didn’t sleep well at all, it was my very first time sleeping in a camper van and I really struggled to fully relax, so most of the night I spent dropping in and out of sleep, also 24 hour daylight was bizarre! So after sleeping for a few hours we ended up getting up at around 6am.

After having a quick breakfast and making enough coffee for the rest of the day, we went to explore Gullfoss…and we were the only people there at 7am! If I could only give you one tip on travelling Iceland, it would be – get up early! Especially if you are travelling in summertime. We probably spent around an hour just taking tons of photos and admiring one of the most famous waterfalls in the world.

Our second stop for that day was meant to be the Secret Lagoon hot springs, but we didn’t realise it only opened at 10 and we were there by 9…We decided not to waste an hour waiting but drove to our next stop – Haifoss. On the way there, we stopped at Hjálparfoss which I randomly starred on google maps. And again, we were completely alone and it was beautiful! I took one of my favourite photos there – those purple flowers pretty much cover the South of Iceland and make it even more magical! 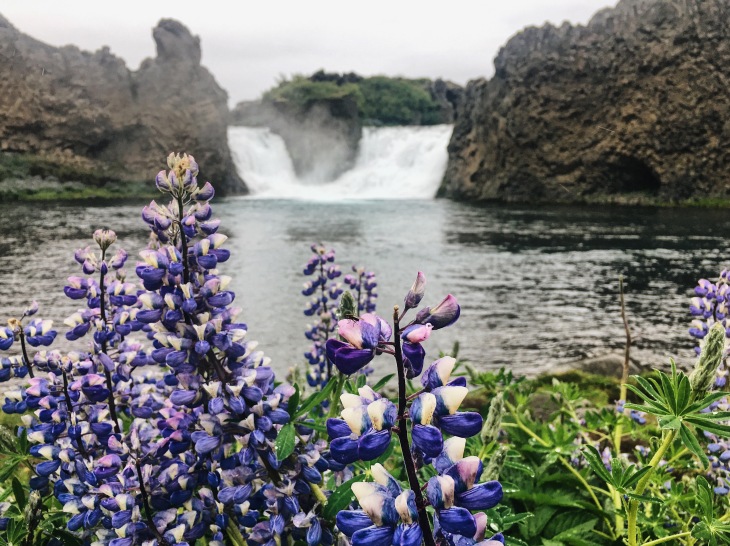 Next and very brief stop was at Þjóðveldisbærinn – the Reconstructed Farm that is based on the excavated farmhouse Stöng from the Commonwealth Era. Again, we were there before 10 in the morning so it wasn’t open, however we did walk around and took a few amazing photos. 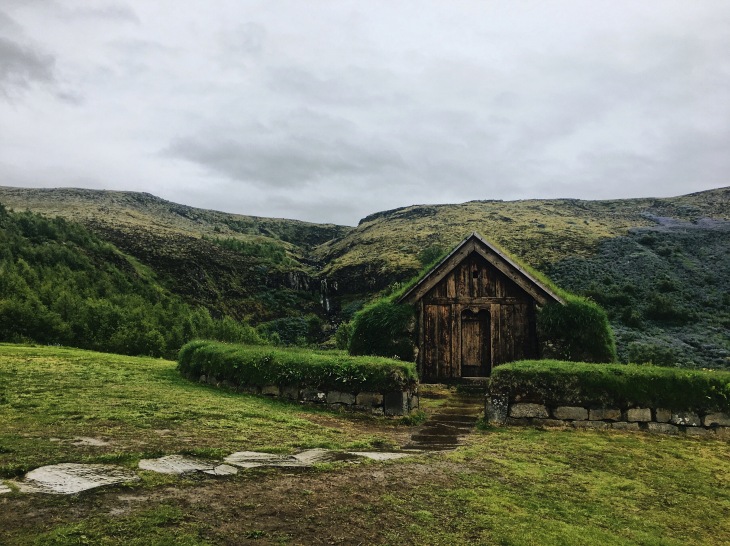 After that we finally headed to Háifoss…I don’t have words to describe what we saw. The nature, the water, the valley – everything left us speechless. I can honestly say, that Háifoss was the most impressive sight I have ever seen in my life. “The high waterfall,  is one of the Highest and also one of the most striking waterfalls in Iceland. The height is impressive as it falls the 122 meters down the two million years old cliff.“ Admittedly, the road there wasn’t great. Our camper van wasn’t 4×4 so the journey there and back was shaky…very shaky. But it was 100% worth it! And as it was raining, photos came out very moody. 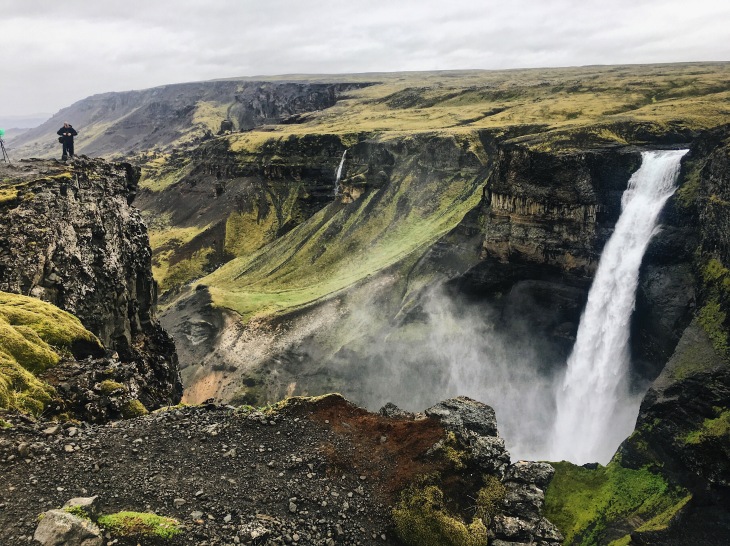 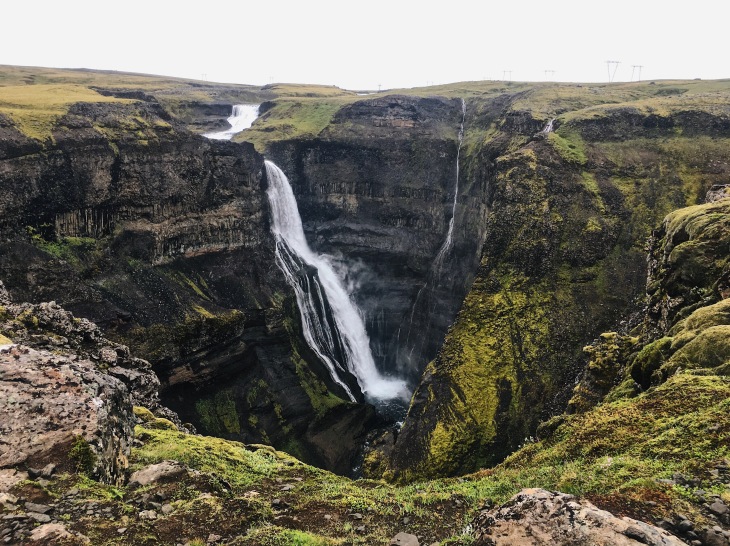 Afterwords we headed South, where our final stop for the day was Skogafoss, however we did stop at another two waterfalls before getting there – Merkjárfoss and Seljalandsfoss. 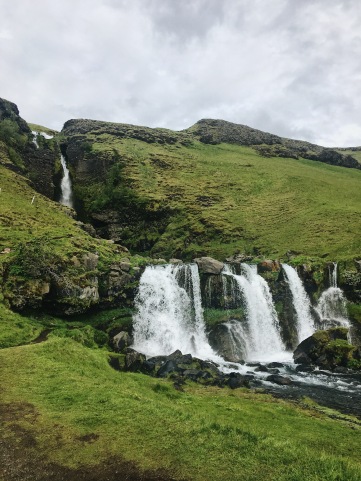 Seljalandsfoss is stunning however it was soooo busy and I strongly recommend walking for a bit to Gljúfrafoss, which is not as touristy but still really impressive, especially because you can walk on wet stones to reach an alcove, which feels like a little adventure on its own.

Our final stop was Skogafoss. We stayed in a campsite at the bottom if the waterfall, campsite was fine, it was very busy so facilities weren’t the best but it did the job. After cooking dinner and having some bourbon (which we bought at Duty free and a bottle lasted us the whole trip) we went to explore Skogafoss. It is definitely worth climbing the stairs, as the views from the top are insane! And we were there at around 10 in the evening so it was reasonably quiet but because of the midsummer, we could still take lots of photos. 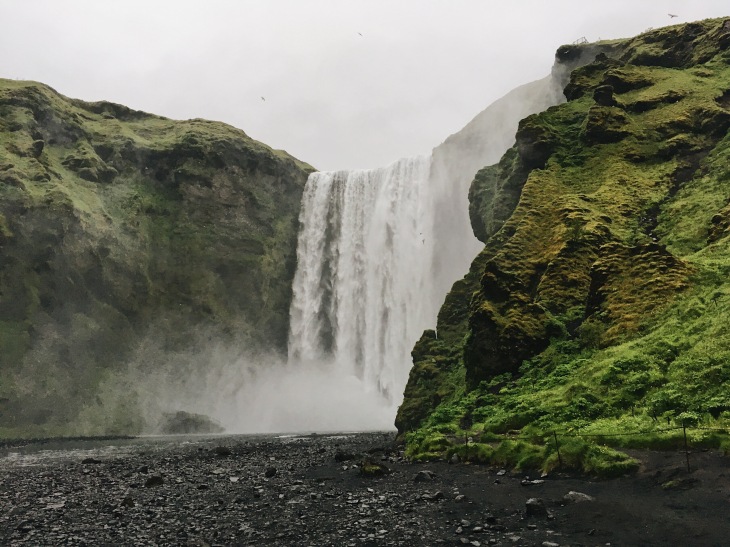 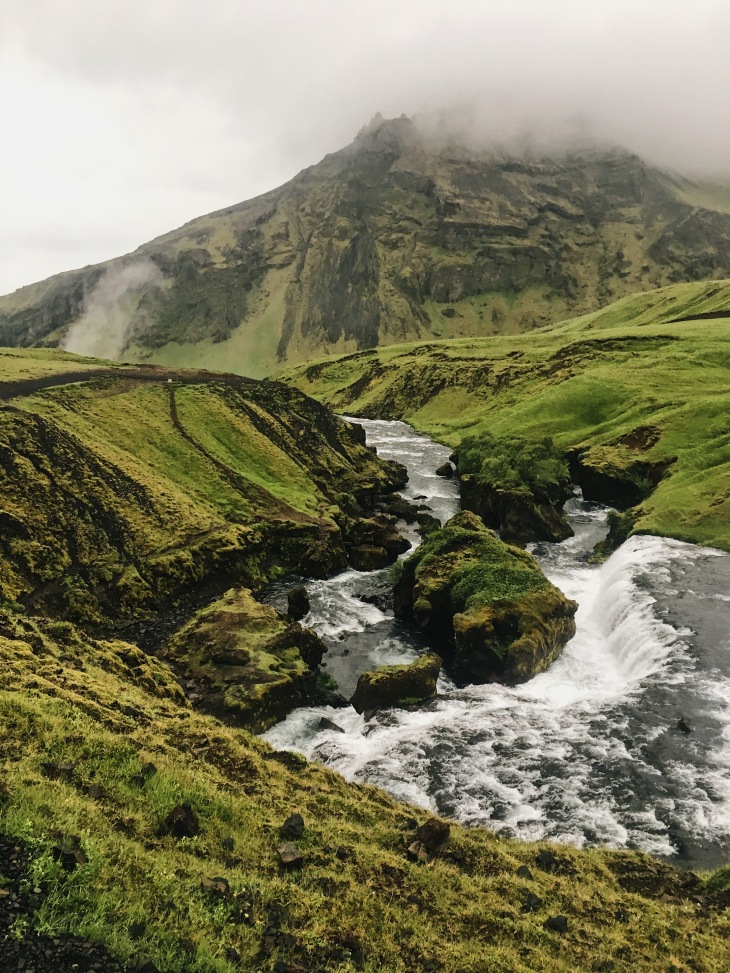 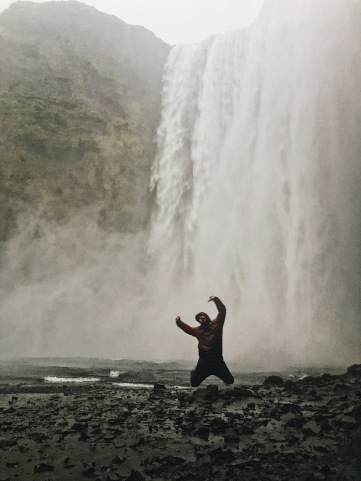 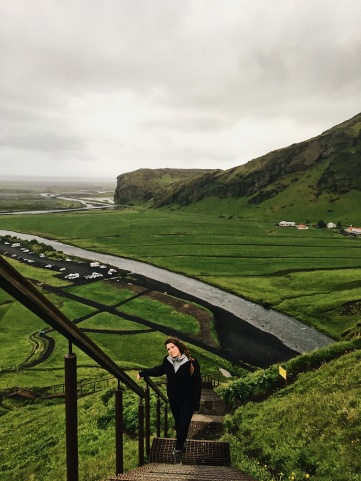 And that concludes Day 2 of our adventure. Stay tuned for more.

Check out the Day 1 if you haven’t yet.

A forever immigrant. Currently living in London. View all posts by Jana Pusia